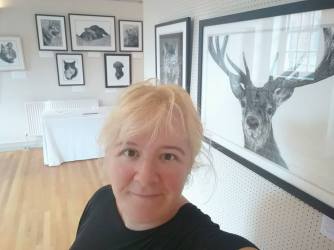 Becky was born and raised in rural Buckinghamshire which serves her as a constant source of inspiration for her work.  Following a love of art & design from early childhood and a clear talent for draughtsmanship at school, Becky went on to study both photography and textile design at university followed by an 8 year career as a freelance photographer specialising in portraiture and fashion. Ever the adventurer, her photography then took a back seat for 5 years as she pursued a calling as a police officer for Thames Valley Police, eventually leaving to move to the Netherlands. Teaching art and photography voluntarily at a school in Holland bought Becky back to her artistic roots and a few years later she returned to the UK with her family to study as an Art teacher.

However, in May 2015 her life came crashing down around her. At 7 months pregnant with her second son and working as an Art & Photography Teacher in a secondary school her world was shattered after her parents were involved in a serious car accident while on holiday in Scotland. Her mother survived after a short spell in hospital but after three days on life-support in ICU her father wasn’t so lucky.  Despite a passion for teaching she had struggled spending all her evenings and weekends on paperwork and felt that her creative side was suffering as a result.  The accident helped put her life into perspective and she realised that unless she took the risk and followed her dream she’d never know if she could!

So now she does her best to live every day as if it was her last. No regrets. She looks forwards to every day and utterly adores what she does.

Bex Arts was born as a commercial enterprise in January 2016 after a commission drawing ‘took off’ on social media. Her style has developed since as she has refined her specialist charcoal techniques, but her primary focus remains quirky, large scale, high contrast charcoal animal portraiture on a stark white background which shows a huge influence from her years as a professional studio photographer. This is also what truly sets her apart from other talented animal artists. Her photography works in harmony with her drawing, she photographs her subjects for the large majority of her commissions and all her exhibition work is all referenced from her own photographs. The combination of high quality, insightful photography and highly realistic drawing techniques produces stunning images full of character and fun.

Alongside her drawing Becky also has a few regular private students, does out-reach with a number of schools and occasionally further afield running workshops across a range of specialisms including several specifically geared towards her current style.  She is also a regular tutor at The Courtyard Art Studio on Claydon Estate where she runs workshops in her specialist techniques.

She is an active supporter of Medical Detection Dogs and has also been involved with leading art workshops with Child Bereavement UK. She is a member of the SAA, Visual Images Group and BAFA (Buckingham Art For All) with whom she exhibits regularly.